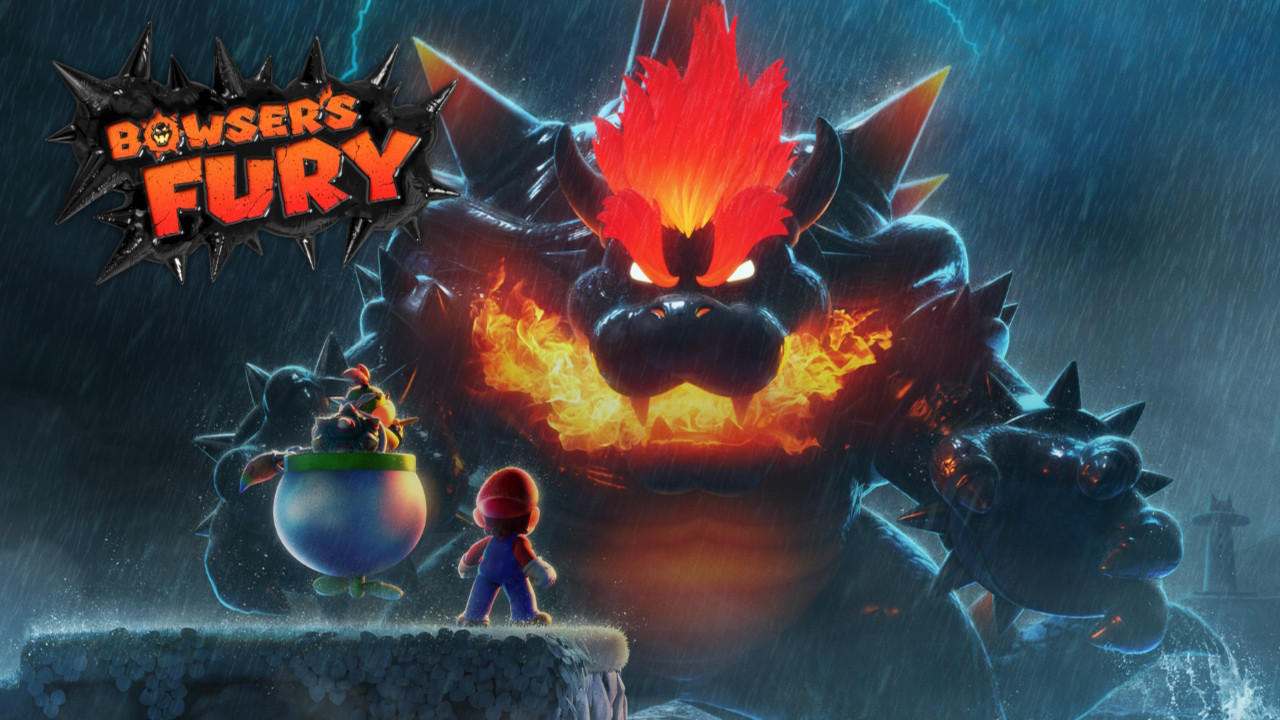 As part of the Super Mario 3D World game on the Nintendo Switch, Bowser’s Fury is a stand-alone Mario game. After finding Shadow Mario’s logo in the Mushroom Kingdom, Mario gets transported to Lake Lapcat, an open-world colorful cat-themed world. He meets Bowser Jr., reluctantly asking for Mario to save his dad. Bowser gets corrupted by a black substance and is now known as Fury Bowser. Mario must collect Cat shines with the help of Bowser’s Jr to help save Bowser and Lake Lapcat.

I admit that Bowser’s Fury sounded like an add-on when announced in the Super Mario 35 Direct. Maybe Nintendo might have a difficult time selling Super Mario 3D World at $60 as a stand alone title, so they included this. This game does have an add-on feel in terms of gameplay and length. I also can’t help but feel there was a chance that this was originally going to be Download content for Super World 3D world on the Wii U, But since that system was a bust, Nintendo held off and released it for the Switch. At least, that is what I’d like to believe. It is like an add-on or DLC, but this feels like it could stand alone and be its own Mario game or take concepts for future Mario 3d titles.

You control Mario as he retains the same power-ups and moves as he had in Super Mario 3D World. You also have Bowser Jr. helping you as well. You can set how much Bowser Jr. helps you with attacking enemies, Making your challenge easier or difficult. Bowser Jr. also holds all of your power-ups and can even reveal power-up graffitied on the wall with his magic paintbrush. You have a maximum of five of each power-up held at one time: the Super Mushroom, Super Bell, Fire Flower, Boomerang Flower, Super Leaf, and the rare Lucky Bell. The Lucky Bell, which is the same as the Super Bell, can turn Mario into a Golden cat statue and defeat almost all enemies. These mechanics take from Super Mario Odyssey’s and other 3D Mario three-hit life gauges and combines cleverly with Super Mario 3D World Powers to use in the Overworld. It’s also great that I can switch powers on the flyers. I’m not stuck with having to collect another power-up from another part of the world if I need it to collect particular Cat Shines. Every hundred coins collected in the game also rewards you with a random power-up. There are no extra lives in the game. Instead, you lose fifty coins, borrowing from the Super Mario Odyessy losing coins when you die.

In my last article, I didn’t mention Plessie, introduced in Super Mario 3D World. Plessie is a portmanteau of plesiosaur and Nessie of Loch Ness monster fame. A ridable character takes you around the Lake Lapcat and has various challenges that you need to complete to collect the Cat Shines. Relatively easy to control and more than in Super Mario 3D World as most of Plessie’s levels are linear, and you can’t command Plessie’s direction as freely as you could in Bowser’s Fury.  I like that Plessie’s role was expanded out in this game and made sense to do so.

Bowser’s Fury takes the open-world concept from Super Mario Odyssey. Scattered around Lake Lapcat are Cat Shines that you need to collect. You free more of Lake Lapcat and clear off the black goop covered around the island; the more shines that you get. You are opening more areas and islands around Lake Lapcat, even changing enemies and island layouts. Some shires are quick and easy to collect; others might take more time but aren’t that difficult to get with either practice or the proper power-up. The island feels like the size of between two or three levels in Super Mario Odyssey. It’s impressive that I didn’t encounter any load times or slowdowns moving between islands (except for handheld mode, which runs at thirty frames per second). There is a long load at the start of the time, presumably to load the game. It’s a minor problem that doesn’t hinder anyone. There is 100 cat Shines to collect, but you only need 50 to complete the game. It’s worth it for the challenge, but nothing else as 100 Cat Shines only unlocks ascetic changes to the characters.

You do have a timer of sorts. After a while, Fury Bowser will awaken as it starts to rain, and the music changes over. Fury Bowser is like a combination of Giga Bowser from the Super Smash Bros Series and the Final Boss from Paper Mario: Color Splash. This design is an excellent concept for Bowser and a significant threat to the player. Fury Bowser has a gargantuan Kaiju size form, a fire beam attack, and rain down spikes that may also double up as platforms to get to hard-to-reach areas. He can also destroy Fury Bowser blocks that hold Cat Shines behind them. Mario must fend him off while Fury Bowser is onscreen as Fury Bowser will pursue Mario by collecting a Cat Shine or outlast Fury Bowser’s attack for a brief period. This timer happens on and off during gameplay, or should you have a Bowser Amiibo, you can use it to summon Fury Bowser at any time.

After collecting a certain amount of Cat Shines, you unlock Giga Bells scattered around the island. When Fury Bowser awakens, the Giga Bell is activated. There are only a few around Lake Lapcat. If you collect one, you become Giga Cat Mario. Mario’s gargantuan counterpart to Fury Bowser. Technically the is a boss fight and the only boss fight in the game. It’s not a hard fight once you know the patterns. But the battle is satisfying. Even trying to find one when Fury Bowser awakens could be a complicated process as there are only three in Lake Lapcat. But it’s satisfying to collect it to fight the menace that is Fury Bowser.

The music is fantastic. I do not see enough talk about this from my circle of friends, but the might be one of the best soundtracks from a Mario Series ever. The serene music of Lake Lapcat gives a sense of relaxation and peace. Making a player feel relaxed and feeling there is no rush to collect all of the Shines. Even the levels have that familiar Mario music feel. When Fury Bowser starts to awaken, the music transitions as it begins to rain and storm, with an ominous tune that sounds like something from a Godzilla movie. Then everything changes over as Fury Bowser awakens. This music is very metal. Which genre of metal is alluding to me. I want to think that it’s maybe heavy, trash, or black metal, but I’m not sure. The diversity of music in Bowser’s Fury is incredible and match any of the levels or situation that Mario is in ideally. I wish that I could take this soundtrack with me and listen to it whenever, as it’s that great.

It’s not a long game at all. I completed this in about four hours. It is a rather fun distraction but doesn’t add anything new for the player than Super Mario 3D World but takes aspects from both Styles of Super Mario 3D World and games like Odyssey and show the potential of future 3d Mario titles. It’s still a great game and a good look into what a forthcoming 3D Mario title can bring to a gamer and video games.

Mostly an add-on and partly a game, Bowser’s Fury feels like a reverse of the former statement. I feel a sense of where 3D Mario games are going in the future, and I’m excited to see how future games get expanded from this. Bowser’s Fury is a short game; completing the game in a few sittings isn’t worth it ascetic changes, only to meet the challenges. The music is some of the best songs I’ve ever heard in a Mario game. Here’s hope that we can get a proper follow-up that adds or follows up in this 3D platforming format in-game and music.