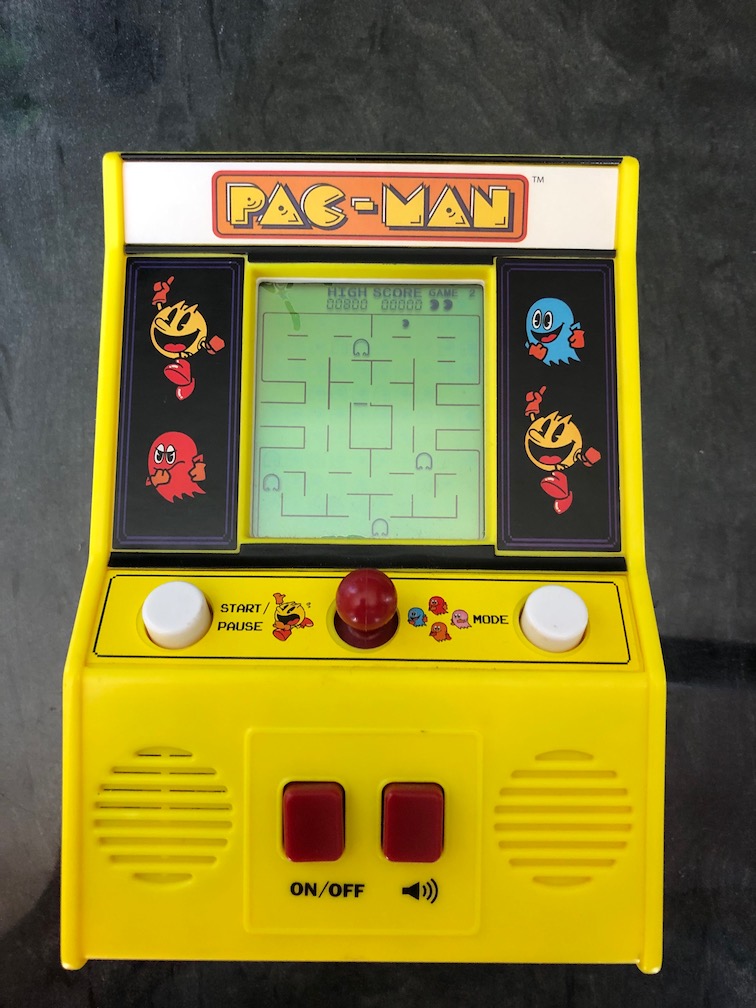 I am someone who usually likes to go out to try and find retro video games in my free time. It’s one of my favorite side hobbies whenever I can get the opportunity to look and shop for games. Whether it’s at a Flea Market, Swap Meet, Rummage Sale, or whatever you like to call them; it’s my thrill of the hunt. While at The Quakertown Farmers Market, I came across a device that someone was selling for five dollars. It was a Pac Man Handheld LCD game by Basic Fun. This plastic yellow mini arcade machine houses a version of the 1980 arcade game Pac-Man as well as another type of Pac-Man bonus game included in the device, as well as the original sound effects found in the arcade game.

For anyone that is not familiar with Pac-Man, it is a maze arcade game from 1980, developed by Namco. The player controls Pac-Man, who must eat all of the dots in the maze while avoiding four different color ghosts that chase him around. If Pac Man eats a large flashing dot called an energizer, this causes the ghosts to turn blue and allows Pac Man to eat them for points.

I was impressed with the design of the machine at first. The unit looks like an arcade game cabinet, and I liked the decal on the front and sides. The joystick feels very stiff whenever I try to move it in any particular direction and comes off as unresponsive at times. The sound effects and music are spot on to the original. Whether it’s the siren sound that the ghosts make chasing you, Pac-Man’s Waka waka waka sound as he is eating the dots, or starting the game with the Pac-Man theme, the sound and music is excellent and on par with the arcade counterpart. But as surprisingly excellent, as the sound and music effects are, this gets annoying rather fast. The ghost’s siren doesn’t speed up as the level goes on and stays at a steady tempo. It doesn’t build any tension when you are playing the game as the original game did. You also get the music from the cut scene in the original game. But it’s when you pause the game, and I get annoyed with it as soon as I pause the game. The speaker has an adjustable volume button on the system, for low, high, or no volume. The system runs on 2 AA batteries and seems to have a decent lifespan. I’ve played it for only two hours though, and I can’t find a definite lifespan for the system anywhere online.

The LCD screen doesn’t have color. Having no color and being a grey and black LCD screen is a problem because Pac-Man stood out with its color in the arcades, especially with the ghosts. In the game, the four different ghosts red, pink, cyan, and orange. With the LCD screen, the four ghosts are just a black outline in the shape of a ghost. The ghosts in the original arcade game also had a purpose with the color of the game. The red ghost Blinky was the chaser, the pink ghost Pinky was the Ambusher, the orange Clyde, the cry baby that tries to stay away from Pac-Man, and the blue ghost, Inky, who is unpredictable in his pattern and can have the pattern of either Clyde or Pinky at different times in the game. In this game, there is only one type of ghost; I can only assume. You can’t anticipate the movements of the ghosts, and I always seem to be in the path of any ghost at any time. What is worse is when you eat an energizer, the ghosts flash on the screen. In the original game, the ghosts turn blue, indicating that you are powered up from the energizer. Eating an energizer on this device doesn’t feel that much different from when you are unpowered up and are moving around the maze. The ghosts flash more, and I wasn’t able to tell if not for the sound effect that the game makes when you are powered up.

The first game mode is a standard game of Pac-Man. The dots on the stage are worth ten points. The four power pallet energizer is fifty points. While energized, if you can eat the ghosts, you can get 200 points if you eat one, if you eat the other three in succession, you can get 400, 800, and 1,600 if you can eat all four. There is no fruit in the game to eat under the center of the maze-like the arcade game and 10,000 gets you an extra life. Once you eat all of the dots on the screen, you go to the next level. You get two lives start and when you lose all of your lives, it’s game over.

This game has two modes the original game which has you playing the original 1980 arcade game, and another game that I haven’t played nor can I find the name of on the internet. It’s a game where you start at the center of the maze, and the four ghosts are at the corners of the maze. There are no dots but the four energizer pellets at the sides at the corners where the ghosts start. You get two lives and have to get the four energizer dots at the center of the screen and return to your home base. This game is surprisingly fun and challenging. But more frustrating given how the game plays and the how you beat the level. The pellets also don’t energize you, so you have to get around the ghosts and eat the pellets carefully. After you get the four pellets, you need to head back to the center of the maze. The door opens and closes at random it never seems to open when I need it to, and closes when I’m almost entering the center of the maze. I have to move around with the finicky joystick until the door opens again and hurry before it closes. You get 800 points when you reach the center and continue this until you get a game over.

If you like to collect video games and video games oddities, then I would get it is worth it. This mini arcade cabinet is an alright device to display but not worth playing for longer than five minutes. If you want to try or play Pac-Man, then play it in the arcade or on the multiple video game consoles, PC ports, tablets, online, or even a smartphone. You may be better off doing that as this game is relatively common and will be a much better experience if this is your first time playing or introduced to Pac-Man.