Skip to content
Teen Titans GO to the movies
Movies

Teen Titans GO to the movies

Thoughts After seeing Teen Titans GO! To the movies. Spoilers are in the post.

**There are spoilers ahead in this post for the movie Teen Titans Go! To the movies.**

The premise of the movie is that Robin, after seeing all of these DC heroes get their own movies (Superman, Batman, even Alfred), Robin wants his own movie.  To prove that he, as well as the Titans, are a legitimate team of heroes.  So Robin, Starfire, Raven, Beast Boy and Cyborg all set out to find an arch nemesis and get the movie that they deserve.

Teen Titans Go! is an interesting show.  The show has garnered a lot of hate from fans of the original show.  The show is silly and not serious as the Teen Titans that it proceeded.  It’s just an OK show at few times to me, but it isn’t as bad as everyone on the internet wants to make it out to be.  Sure it has bad jokes, and bad episodes, and both at the same time:

Part of the Episode of Waffles from Teen titans Go.  It’s, just, BAD!!!

But it also has some good shows and good jokes and both at the same time:

Part of the Episode Mo Money Mo Problems.  The references amused me especially the stuff from Val Kilmer and George Clooney

Going into this movie, I didn’t know what to make of it.  I thought that this would be an attempted forWarner Bros to out do Sony’s The Emoji Movie as one of the worst films of all time.  When the movie was announced it’s garnered a lot of hate online.  I didn’t like the first trailer, but liked the second one and the marketing around the film was actually pretty good.  From every titan being Wonder Women, because Wonder Woman was the most successful DC Movie of all time, and even reading the “tame” hate tweets that the movie was getting from the first trailer.  But as the teaser trailer said:

I decided to pull the trigger and see it after a recommendation from my friend.  While still being the same feel of Teen Titans GO! that I have seen on TV, somehow it seemed to work a lot better in theaters.  It might be one of the better DC comic movies made, but nowhere near Wonder Woman.

One of many self referential jokes made on DC movie properties, and this is before the movie was released on a movie poster

I did like the opening credits kind of parodying the Warner Bros. DC movies opening, followed by the coming pages flipping like Marvel movies, only to begin the movie and reveal the seagull (I believe) from the opening of the show that sits on the rock to start the movie.  That’s what this movie seemed to do right, the referential parody of super hero movies, DC and Marvel, as well as Warner Bros failed project attempts were great.  How their Green Lantern movie was a failure.  The constant calling of Slade Deadpool, even though Slade, or rather Deathstroke as he is known in the comics, was created before Deadpool.  How Batman will never give up on a vehicle chase by using vehicles right down to bat skates when the heroes are trying to stop the titans.  I believe this is a parody of the scene in The Dark Knight in a chase for the Joker when the Batmobile was destroyed and he came out in the Bat cycle.

The big one that I read and can’t believe Warner Bros Executive allowed was the Superman Mustache reference:

Just to sum it up, this was caused when reshoots needed to be done for the Justice League Movie, but actor Henry Cavill was shooting another movie (Mission Impossible; Fallout) at the time and wasn’t allowed to shave off his mustache that he grew per contact.  So, there was some CGI done to remove his mustache in Justice League, but it made his face look, off.  Just some of the many jokes and references that suprprising worked in this movie. The music was fun and catchy as well.  I caught myself humming “Upbeat Inspirational Song About Life.” a couple of times after I left the theater.  The scene was funny as well and I liked the animation in that sequence.  Michael Bolton on vocals was awesome and fit well.  “Go” was a very catchy song on the beginning during the fight with Balloon Man and the “Go” battle remix at the end when the titans battled Slade in his Giant robot was great.  The soundtrack is worth a listen to if your interested.

The other plot involved Slade creating a weapon to control the movies of Superheroes and everyone around the world.  His reasoning behind him being able to get away with doing this was do to superheroes being busy making and watching movies was kind of smart, in a senseless way.  Hmm, a villain that wants to control the mind of supers around the world.  Kind of sounds familiar to something I saw eariler this year…

The battles and fights in this movie were actually good.  A lot of the time on the show the battles never go past one minute or two.  The fights here are longer and more detailed.  I guess due to the hour and a half runtime versus the 10-12 minute runtime that they get on TV.  The animation looks and sounds a lot better. I did expect that since it is making the jump from TV to movie screen.  The battle with Balloon Man in the beginning was good, I did like the joke of Slade asking how the Titans are going to defeat him, fart on him, dance off, annoying me with your waffles.  This is pretty tongue in cheek reference on how fans feel that most of the shows episodes problems seemed to be solved.  But fights actually ended with satisfying conclusions.

The movie still had the bad running gags that the show does feature.  Like the Titans acting very juvenile and more like spoiled kids instead of teens at times, but at least not as bad as in the show.  I was annoyed by constant announcing of SLAAAAAADE throughout the movie when the teen titans or other heroes encountered him.  Even Slade’s “Mind Manipulation!” tricks were just him using cheap tricks that would just fool toddlers were pretty dumb and time stretching.  Also there were some hit and miss jokes when the Titans traveled back in time to stop superheroes from becoming heroes.  I enjoyed the stupid but funny way they went back in time on time cycles (just big wheel bikes), or how they prevented Bruce Wayne’s parents from getting killed to later how they killed them.  But for the rest of the heroes, the jokes were just ok.

The one thing that I’ve addressed in prior blogs before that I dislike that this movie made me laugh at, was the Stan Lee Cameo. I have said before that I dislike them because the didn’t add anything to the Marvel movie(s) he appears in. Here, it’s a joke that Stan Lee will appear in any comic book themed movie for attention, even if he is hesitant when he find out it’s a DC movie. It took DC to make a good joke about a Marvel creator cameos in movies.

The movie retains the voice actors from the show.  Which is good because I dislike it  when hollywood casts celebrity actors to an animated movie just to increase box office revenue, then use lesser known actors for TV shows.  There are a couple of big names like Nicholas Cage, who is the voice of Superman, finally giving the world the Nic Cage Superman that we wanted, I think.  Kristen Bell is Kate Wilson, a new character who is responsible for all of the superhero movies being made in the Teen Titans Go Universe.  Both were fine for what they were, some extra star power.  We also have Will Arnett voicing Slade.  Arnett doesn’t sound original or different at all, but like another character he voices, Bojack Horseman.  It was kind of distracting as all I could this about the whole time was Bojack Horseman under that Slade uniform.  I’m convinced that if I had the time and the know how, I could sub lines from BoJack into Slade’s dialogue and no one would know the difference. 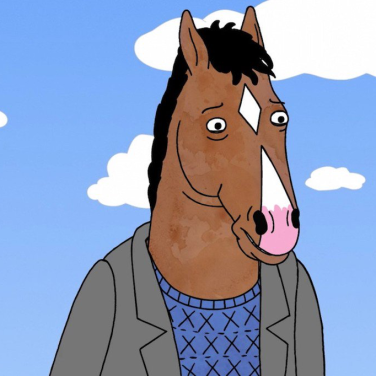 Slade sounded too much like Bojack to me.  Maybe the upcoming fifth season of Bojack Horseman will work this into its story, thought I doubt it.

There is an interesting scene in the mid credits where the original Teen Titans from the 2003 series are trying to get a message through that they are still here and trying to find a way out. It does give me some interest, but hard to whether this is a legit story or a tease. Teen Titans GO has done teases before like this before in the show.  But it might show you what can happen and what surprises that you may find in you give something a chance.  If course, that secret has already made its rounds on the internet by now, so it may not be as surprising by the time you see it.

Think I’m right or wrong about anything?  Anyone else actually watch this movie?  Let me know in the comments and thank you for reading.

I'm from and living in North East Pennsylvania (NEPA). I break away from the 7-5 full-time job life I live, by going to movies, playing video games, trying new activities.