**In this post, I talk about the game Super Mario World.  Although I feel the Mario story of Mario saves Princess Peach is quite common, there maybe things I mention that are considered spoilers to others.**

In this game, Bowser has taken over Dinosaur Land and kidnapped Princess Peach. and it’s up to Mario, Luigi and their new friend Yoshi to save the Princess from Bowser and his Koopalings.

I missed out of this game when I was a kid.  The Super Nintendo had just came out and I couldn’t convince my parents to buy one since it’s was too expensive for the time.  The original price of the console was $200 in 1990, which, adjusted for inflation, by 2018 is pretty much double that price.  So I decided to go with the Sega Genesis instead.  Like some other gamers of the 1990’s, I got swept up in the console wars and went to Sega after playing Sonic the Hedgehog, Streets of Rage, and Kid Chameleon.  Genesis does what Nintendon’t, I believed.  I had a NES, but didn’t own a Nintendo system until the Gamecube came out in November 2001.  Looking back, I felt kind of foolish about getting swept up in fanboyism.  I missed out on a lot of great games for all systems.

I was a sucker for that Blast Processing

I’ve been playing this game on the SNES Classic.  Super Mario World has been released originally on the Super Nintendo and ported on several different consoles like the Wii, Wii U, New Nintendo 3DS, and a ported, sort of remade for the Game Boy Advance under the Super Mario Advance Series.  I’ve been using the rewind feature and save states a lot.  You are able to save, but only after you have taken down a castle or find a new exit to the level.  The controls and jumping in the game aren’t bad, but I find myself rocking the D-Pad left and right when I make a jump to land on a platform.  Even on longer platforms or solid ground I still find myself doing this.  Mario just feels like he is slipping around a lot in the game and controls like Luigi. By that, I mean how Luigi has a faster sprint and higher jump, but takes a longer time to stop. Not sure if I’m just experiencing lag with the system, but I do feel a slight delay in Mario’s controls.  Mario also has a spin jump, but I only seem to find myself using this to break bricks when I’m Super Mario to get below to another area.

What I seem to have problems with the controls, at least I can say that this game is still fun.  The sprites, backgrounds and enemies all look great.  The music is great and catchy and sets the mood for each level.  Whether it’s the haunting sound of the ghost house, or the cheerfulness of the over worlds, Koji Kondo, the composer did a great job.  I keep wanting to go back to it and beat a level that I was having a problem with.   Not, I want to rage quit and not play again.  Well, that is until I got to the World 9 Special Zone.  You get here after you find the secret exits in World 8 Star Road.  I did get past the first three levels of 90’s saying (tubular and Gnarly sounds really dated to me), the rest are just rather difficult for me with the controls.  While the levels are a challenge, the mini bosses and bosses are rather easy for me.

The overworld has a nice layout.  It’s the layout of you can’t progress until you defeat a level and goes kind of non linear unless you find another way out from a level.  This is indicated by a red dot on the level.  It gives a good amount of replay as there are 96 different exits to find in the game.  I like the addition of Ghost Houses.  Primary filled with Boos and other types of “dead” enemies like Dry Bones, eeries, and boo buddies.  I like the challenge and the redirect of these levels to find hidden exits with the use of a P-block for example. 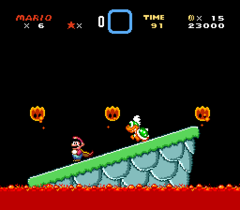 Some screen grabs of the battles with the various Bosses in the game.

The Koopalings all have different attacks than the shoot the magic wand and charge at you from Super Mario Bros 3.  But they are Mario platform boss standard; jump on them three times, or knock them off of the platform to defeat them.  Bowser is the Final Boss, and he is pretty difficult to defeat.  I need to say that I found this battle pretty intense, even today.  The lightning flashing in the back ground, Bowser flying around in the Koopa Clown Car with a seemingly endless cannonballs. It’s insanely spacious inside for the amount of cannonballs he throws at you.  I still can’t figure out how he filled so many cannonballs inside that thing unless he modded a TARDIS from Dr. Who or something to that extent.  The first use of mode 7 graphic as he charges the screen after a few hits was, and still is, awesome.  I also liked how the countdown timer is gone from the battle.  Almost giving you no excuse that you can run away saying the timer won’t let me beat this final boss.

A lot of Mario enemies made their debut here.  Some of my more notable enemies to first appear for me are Wiggers, a caterpillar like foe who turns red and angry when you stomp on Wigger’s head (minus the train whistle Wiggler has in later games).  Banzai Bills, a larger version of Bullet Bill, that seems to take up nearly half the screen whenever he is fired towards Mario.  Big Boo, a larger version of Boo and one of the mini bosses you face, but still retains the Boos trait of chasing you when you look away.  Chucks, the sports themed enemy who attacks you various ways, such as throwing baseballs/footballs at you, charging after you, and punting footballs at you.   Finally Magikoopas, Koopas that can cast spells and change objects into enemies.  What I found is that the Goomba’s were removed in favor of Glaoombas and Cheep Cheeps had a strange redesign that both came off as odd to me.

Mario has a couple of new powers.  Grabbing a feather, turns him into a Cape Mario. He can fly for a short time, then use his parachute to glide back down to safety.  It’s tricky to do at first, but once you get the hang of it, it’s a rather useful power up.  This game also introduced the power balloon.  It puffs up Mario like a balloon and can fly/float for a short time.  The biggest power-up or rather friend that Mario comes across is Yoshi.  I like you can switch power ups on the fly if you have one saved in your inventory, but a pain if you aren’t center to catch the power up and run the risk of losing it.  I prefer the Super Mario Bros 3 style and chose the power up before you enter a level.

Yoshis are one of the main residents of Dinosaur Island. There are green dinosaur that Mario rides like a horse and adds a bongo drum to the soundtrack whenever Mario rides him.  They are eat practically every enemy you come across.  Yoshi can also eat berries scattered across the game.  Each berry can vary from type to type from power up to more time for your counter.  When Yoshi also eats a Koopa Shell, he can do three different attacks.  Eating a red shell, Yoshi spits out three fireballs, yellow allows him to do a ground pound, and blue makes Yoshi grow wings and fly temporary.  Primary, you have a green Yoshi’s throughout the game but later on in the game you can get three different colored baby Yoshi’s which have different powers depending on what color Yoshi you have.  The are babies until they eat 5 enemies.  The color of the Yoshi follows what shell color it parallels if the green Yoshi eats (Ex red Yoshi spits out three fireballs despite the shell color that it eats but still retains the other effects of the other color shells as well).  The only place Yoshi doesn’t enter are ghost houses and castles.  Overall, I feel Yoshi’s are one of the best way to experiment with gameplay and discover new ways to play and exit level.

If you have any good Super Mario facts, things I left out, or any fond memories that you had of Super Mario World, let me know in the comments and thank you for reading.