Movies, Games, and Other Topics

In this game, you assume the role of Ori, a white guardian spirit, and Sein, the “light and eyes” of the Forest Spirit tree and Ori’s guide. Ori fell from the Spirit Tree during a storm and was picked up by Naru, his adopted mother. A cataclysmic event causes the forest to wither and Naru to die of starvation. Alone, Ori collapses near the Spirit Tree and be restored by it. Later, Ori meets Sein and to restore the forest, Sein guides Ori to recover three of the main elements to Restore the Spirit Tree in the Forest of Nibel.

Back in my Some games I’m looking forward to from E3 Blog, Ori and the Will of the Wisps was one of those games. That week, Ori and the Blind Forest was on sale for half price on Xbox Live.  Is it worth it for full price?  That answer differs from person to person, and I feel it can be.  I purchased the game (half price off of course), and I’m glad I did.  It follows the Metroidvania style of gameplay.  The term Metroidvania combines the name of Metroid and Castlevania and features a vast world where you explore and find hidden areas and secrets.  A lot of the time, there are inaccessible areas until you acquire a new type of power that allows you to reach those areas.  Ori does this genre well.  I didn’t feel stuck when I got to certain seemingly unreachable areas of the game, and I found upgrades rather easy to find.  I did like the ability to save anywhere in the game at the cost of an energy cell.  It helped to stop unnecessary back travel. Even with that, the game always felt like Ori and the constant trial and error.  I died many times and had to go back several minutes to a prior created Soul Link because I was out of energy cells to quick save.  It was rather frustrating but satisfying when I finally conquered a problematic section.

The game isn’t long and has replayability. The pacing was great, but it could have used a boss battle or two. The closest that the game comes to a boss battle is Kuro, the main antagonist and an owl who lost her children when the spirit tree called out of Ori. Explained in flashbacks in the game, when the Spirit Tree released a flash of light to look for Ori, the cry of light killed all of Kuro’s children except for one egg that didn’t hatch. Kuro took away the core of the spirit tree to save her last egg. Even then, running into her occurs in the latter part of the game. Most of the time, you are just hiding and running away from her. The closest that we got to boss battle was an enemy rush and a closed-door that won’t open until you defeat every enemy. The Ability tree is diverse but straightforward to allow a player careful consideration on which path of powering up to chose when playing. 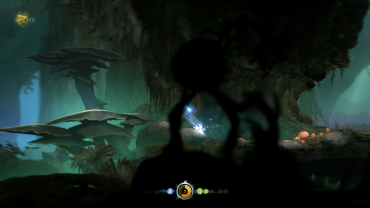 My Favorite moments is when Gumon is following Ori in the foreground.

The narrative being said during your gameplay works great.

There is always the question; “Are video games art”? I feel that art is subjective. That being said, this game feels like a work of art. I loved the hand-drawn look of the game. Everything looks very vivid and colorful. Ori’s animation is smooth in all of its actions. Whether it’s jumping, attacking, or moving from left to right, I feel that the game flows rather well. It’s also incredible that there is no loading for the game except at the beginning. I did encounter slowdown at some points of the game. Mostly whenever there was an encounter with Naru. The background of the game feels like a giant map or canvas. I didn’t think that the environment was recycled at all, and the areas felt original. Even the creators stated that certain assets would appear unique to each section of the world.

I read that the game takes inspiration for its story from many works like The Lion King, the animation of Hayao Miyazaki (the animator/director at Studio Ghibli) and the gameplay and style of Rayman Origins/Legends.  I also felt a bit of How to train your Dragon.  I could be the only one about that, but it’s how I think.  The music is some of the best that I ever heard.  This game is an instance that the music set the mood of the game and complements the story rather well.  I thought Gareth Coker did a great job. I’ve included a link to the soundtrack on Spotify below.  Take a listen to it. It’s wonderful.

The story is straightforward. No voice over but the narrative said through a speaking gibberish and text reading:

However, the one thing that ruined the game for me was seeing Ori and the Will of the Wisps trailer before playing this game.  When I started Ori and the Blind Forest, you get this profoundly emotional opening of Naru finding Ori.  You see Ori grow up Naru and the relationship that they developed.  When the forest was dying, it’s was hard to watch when Naru gave the last piece of food to Ori and see her die of starvation.  It was sad and confusing.  I saw her alive in The Will of the Wisps trailer, what gives?  While playing through the game, you encounter Gumo. Gumo, a spider-like creature and the last of his kind follows Ori around in the game.  He revives Naru with his clan’s treasure, that stored light from the Spirit Tree to revive Naru.   It ruins such an emotionally gripping scene at the beginning, only to cheat death at the end.  I guess it sets up the device for Naru to sacrifice herself to restore the forest and save her last egg.  The story had a strong beginning for the story that led to an ok and predictable ending.  Most people might have hated that aspect of playing the game before the trailer.  That just got ruined for me in the trailer.