Thoughts on the movie Wind River, there are spoilers in this post

It’s been awhile since I posted anything.  I was letting laziness get to me.  Plus I wasn’t happy with how my last posts were turning out.  The only way that I’m going to get better is to put more posts up and keep moving forward.

Inspired by actual events, Game tracker and hunter Cory Lambert (Jeremy Renner) works with FBI rookie agent Jane Banner (Elizabeth Olsen) after he discovers the body of a local Native American girl frozen in the wilderness of the reservation.

Right away, after the opening of the Indian girl running through the snow bare foot and afraid, the area felt desolated.  The winter setting of the movie was on an Indian reservation in Wind River, Wyoming.  There were not a lot of people that inhabited the reservation and mountains shown in the movie.  It almost felt like a ghost town and nearly impossible to live in during the harsh winter.

Renner and Olsen were OK with their performance.  When I saw them, The Avengers and The Marvel Cinematic universe came to my mind.  I couldn’t see Cody or Jane at times but Hawkeye and Scarlett Witch.  What has the MCU done to me. 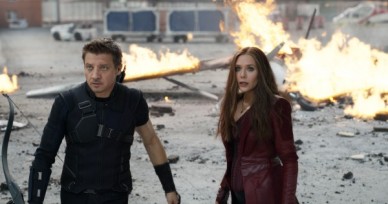 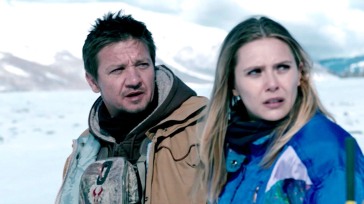 Anyway, bad jokes (although I’m not sure if that counted as a joke) aside, the character I liked the most was by the local Chief of Police Martin Hanson (Gil Birmingham).  Something about his role was my favorite.  I didn’t pay much attention to the cast besides Renner and Olsen.  The rest of the cast felt like throwaway to me.  They either get killed or don’t get seen or mentioned again.  I couldn’t tell you about the rest of the cast except for the family of the girls victim had a slightly memorable role.  I even forgot that Cody had a son and wife in the movie.  The focus was on another child Cody had in a movie that had a tragedy that set up his character.

The film doesn’t have a lot happening, at least until the end, which had a great climax.  The two opposing parties had a tense standoff that was great and frantic.  Everyone was trying to claim domain and power over an area and situation that really no one should have been able to say was theirs to control.  But no one was able to diffuse anything until Banner step in and screamed FBI claiming federal law to control everyone.  It took a rookie of the whole situation to finally get ahold of a lawless type of situation.

Overall the film has a western feel.  This movie is considered a Neo Western genre.  I can see how the genre overlays a western genre story over this movie and see many similarities.  I liked how technically the girl wasn’t killed by anyone but killed by the cold and hemorraging.  She was running in the beginning trying to escape from being raped and attacked.  Her attackers while responsible for her death didn’t kill her, mother nature was the true killer determined by the medical examiner of the town.  It helped to set up a revenge story we help was going to be scarce.  Otherwise, if she was murdered and the FBI would have intervened and the film could have been over in 10 minutes.  It was good to get some sort of law with Banner.  She was a rookie and very much an outsider when she announced that she was from Florida.  She was upset when the medical examiner didn’t rule the death murder.  I liked the getting exposed to injustice she saw for the first time.

The movie even foreshowed, to me, an event at the beginning of the movie.  Cory at the beginning is hunting Wolves or Coyotes I believe from attacking sheep.  He kills one and the rest run away.  He is a hunter and out to stop his targets and gives them a chance at the same time.  *MAJOR SPOILER* He winds up killing everyone involved with the girls death and spares the one ultimately responsible for the moments.  He gives the attacker after he confesses to the attack and give him a chance.  The same chance that she had.  Run Barefoot in the snow to the nearest highway.  He needlessly went out with a whimper calling the victim a bare warrior to run as far as she did from him.

That’s all I got, anyone have any questions or comments.  Please leave some.  Thank you for reading.

I'm from and living in North East Pennsylvania (NEPA). I break away from the 7-5 full-time job life I live, by going to movies, playing video games, trying new activities.